Alchemy Horizons on the Horizon

Hello my friends! Welcome to another article in which we will explain how Wizards is trying to
convince us to play Alchemy, or to hate it altogether.
Today (June 23) starts the preorder of the new digital set from MTGA Alchemy Horizons:
Baldur’s Gate, which includes 81 new cards and reprints from Dungeons & Dragons:
Adventures in the Forgotten Realms that bring in even more D&D flavor.
In addition, this new set includes new and strange mechanics that we will try to explain:
• Specialize – Pay mana and discard a color/land type of your choice to change your card
to that new card with its effects (the change depends on which color you discarded). 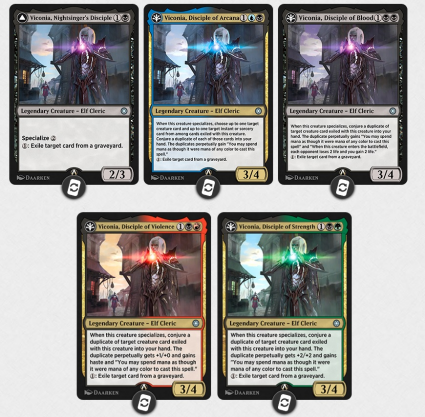 Yes, the same card has five different alternatives. How is this possible? Alchemy is the answer.
So, my friends, get ready to read a lot, a lot, every new card. And, if possible, on top of that,
to understand that new card.
• Double team – When a creature with double team attacks, if it’s not a token, conjure a
duplicate of the original into your hand, and then both cards lose double team. 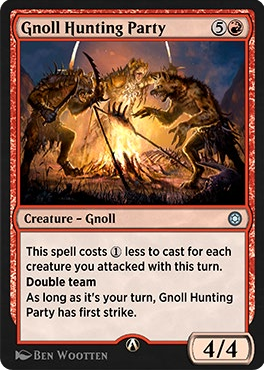 Ok, this one is simpler. Creatures with Double Team generate card advantage. Let’s remember:
Alchemy is the format of 2×1 and card advantage.
• Boon – A new-to-MTG Arena mechanic, not exclusive to the Alchemy Horizons:
Baldur’s Gate set, boon is a way to represent delayed triggers, similar to an emblem,
but once they trigger, they disappear. 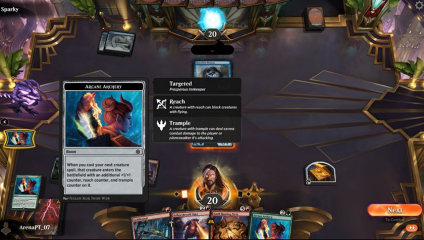 Well, they have named an effect that already existed. Like, for example, the ability that the  Tenacius Pup had. Now instead of explaining all that, it’s called Boon.

Will this new set be what saves Alchemy? Will it remain the least played format in Arena,  accounting for only 1.5% of ladder matches? I don’t know, but it seems that it is the strong bet  of The Wizards and it seems that it will be the only new thing in Arena until the release of the  new Dominaria set in September.

The Qualifier’s Weekend was played last weekend –I suffered a resounding loss– and there  were complaints about how difficult it can be going 7-1 over the two days. In addition, there  were problems in some cases due to the delay in finding opponents.

Fast forward 2:40 hours in que, no one came – not even @HAUMPH to teach me a lesson.

Played Rakdos to a 17-2 record (Qualifier+Day1+Day2) I drew a bit lucky, but most games where extremely grindy and I think i navigated it pretty well.

After Michael Bond’s tweet went viral, thanks to the support of the community, The Wizards  got in touch with him and, after confirming that he spent almost 2 hours waiting for an  opponent, they gave him a bye and thus qualified for the Arena Championship. Who doesn’t  love happy endings?

If the multi-champion of Protour Kai Budde says that something is difficult, it definitely is and  this is how he expressed it on Twitter:

does anyone know of someone that got to 7 wins in day of the arena PTQ? I don't think i saw anyone tweet and I wonder if no one did … with this structure, that is not all that unlikely. 🙂

Frank Karsten, although he did not complain, did highlight the level of Qualifier Weekend and  the necessary official information to understand the metagame of the format:

To me, it's bizarre that WotC has not posted any decklists or standings of the Explorer Qualifier Weekend. The level of competition on Day 2 seemed similar to the top tables of a Pro Tour.

Perhaps The Wizards could give us another “life” in the Qualifiers and allow us to go 7-2 to  qualify, at least on the first day.

Well, my friends, this is all for today. Remember that this weekend the $500 Cash GGtoor  M:TG Arena Duel #15 will be played. Free admission and $500 in prizes!!!! More information in  the following link: https://www.tournamentmtg.com/event/500-cash-ggtoor-mtg-arena-duel 14-free/

See you!! Have a great week!