What started out as an extremely casual mode became Magic’s most popular format. That’s  right, the multiplayer format that MTGA still cannot offer is the most played and it’s also the  one that generates the most sales, the one that has revalued the most cards and collections,  and the one that offers the most possibilities for decks and strategies. 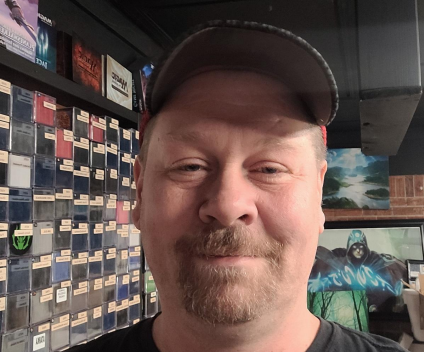 Brian Canada is 46 years old, lives in Tennessee (USA) and has built 912 Commander decks, the  last one with Ganax, Astral Hunter. The decks are labeled, numbered, and carefully stored in a  dedicated room in his home. Brian’s goal is to make decks with every legend ever printed in  Magic, which is –by his calculations– about 1,400 different Commander decks (counting only  one possibility with each partner).

“I love variance in game play and I love MTG, Commander offers both of those,” explains Brian,  who has the YouTube channel Cure for the Common Game, where he shows each of his decks,  explains them and puts the approximate price to build them –usually about $50.

Juani Salas: What was the first Commander deck you put together?

Brian Canada: Oh gosh, I can’t remember the exact Commander. But it was around the time of  Time Spiral standard. I read an article on the MTG homepage about this wacky format  that the judges were playing after hours at the Pro Tour, so I built two decks and took it up to  my flgs, and me and a friend played. So, both of those would have been two of the Planar  Chaos 3 color dragons.

JS: When did you decided to start putting together so many Commander decks?

BC: About 6 years ago I found myself with a lot of free time, so a friend told me that  I should start a YouTube channel about Magic. I started to do deck techs on the decks I had  already built, which were around 80 or so. Several months later, a new set had come out and  I was staring at the singles case, trying to decide which legend to buy and build, when a guy  walks up and asks me, and I explain to him, and he says: “I thought you were going to build  them all”. Challenge Accepted!!

BC: As I said, I love high variance and I am somewhat of a completest, now at the time  I started there were only around 700-ish possible decks.

JS: And now, what is the number of possible decks?

BC: The number of possible decks is hard to calculate, due to the partner mechanic, there’s  something like 1,500 possible combinations of just partners, as such I only use partners once.  That being said I’ve come up with a spreadsheet, and I believe the number is around  1,400 decks.

JS: What does a legend need to call your attention to put together a deck? BC: Be printed. My goal is to use every legal legendary creature as a Commander.

JS: Deck space is an issue in every Magic player’s home, and you have almost  1,000 Commander decks. How do you go about storing them? Did you have to design a  special room? 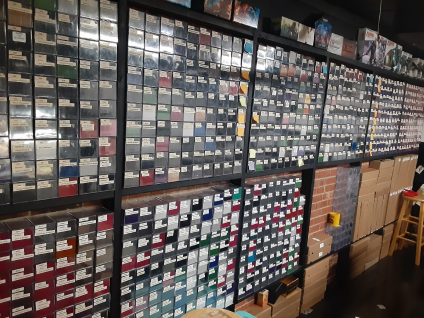 JS: Which are the top five Commander decks that you have and what could you tell about  each one of them?

BC: Wow! This is a hard question. It’s hard to pick out just five. I love tribal decks that  don’t regularly get attention, like Griffins. I love my Azusa deck; Landfall is one of my favorite  mechanics.

JS: How do you come up with so many decks and how do you make them different from  each other?

BC: I try to build around the Commander’s theme, whatever that may be, which is most of the  time unique, but there are a lot of legends in the past that are similar. I can’t tell you how  many elf decks are on the wall because the Commander wants you to play elves.

JS: What advice could you give to someone who is about to put together a Commander  deck?

BC: Remember: we play this game to have fun, don’t take it too seriously. It’s not about  optimizing every slot in the deck, it’s about a group of friends sitting around a table having  a good time. 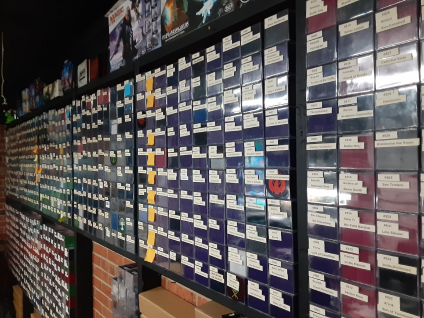 JS: What do you think about Commander being a competitive format?

BC: One thing that Magic has taught me is that I can see something and realize it’s not for me.  Competitive Commander is not for me. I get that a lot of players love it, and that’s great. But  for me it defeats the purpose of the format, EDH was created as an escape from  competitiveness.

JS: What’s the type of Commander deck that bores you the most?

BC: It’s hard to be bored playing Commander. I guess the board state that loses my interest  sometimes is when a player has a definite advantage and cannot win the game. Prison is fine,  just finish the game so we can play another! I guess it’s game stalls

JS: What “crossover” would you like Magic to do?

JS: Do you like the other Magic formats, the traditional ones?

BC: I have played them all, including some that we have invented. There are periods of time  when I am intrigued by Standard, although that hasn’t happened in a while. I like Modern,  Legacy, Vintage, but my absolute favorite format does not exist anymore: Blind Prerelease.  There was a day when we had to travel to a prerelease because there was generally only one  per state, and you had no idea what cards were in the set. Preview season did not exist. That

feeling of 300-500 people opening packs and getting the first glimpse of a set for the first  time… now that’s magical.

In addition to his YouTube channel (with over 7,000 subscribers), Brian will open a game store  in the near future, which is currently under construction. “‘Canada’s Collectible Games’ will  focus on what I call person-to-person games: card games, miniature games, board games,  RPG games, all games where you have to have other people to play. No video games  whatsoever,” explains Brian, an almost anachronistic space for those of us who enjoy tabletop  games and, of course, playing with his almost 1,000 Commander decks. “I am focusing on play  space and building a community around these games that we love,” he says.

1 thought on “All Possible Commander Decks?”