Hi there, I have been testing non stop for about 2 weeks with my team the Sanctum of All for the Streets of new capenna Championship which I will be competing in! Today I’m going to show off some decks that I did NOT submit for the event. This is my first ever Pro Tour level event I’m going to be competing in so it was an honor to test these decks out and work with some Amazing minds in the game like, Arya Karamchandani, Chris Botelho, Ari Zax, Rain/Autumn Burchett, along with many others who contributed to my testing. My job in the group was mostly focused on figuring out the non Blue Midrange / Sacrifice decks, so that’s where I put the majority of my effort into and then helped around with card choices / sb plans with all the other decks. There are some things I definitely wish I could have done differently but this was a great learning experience that I will take into the future. 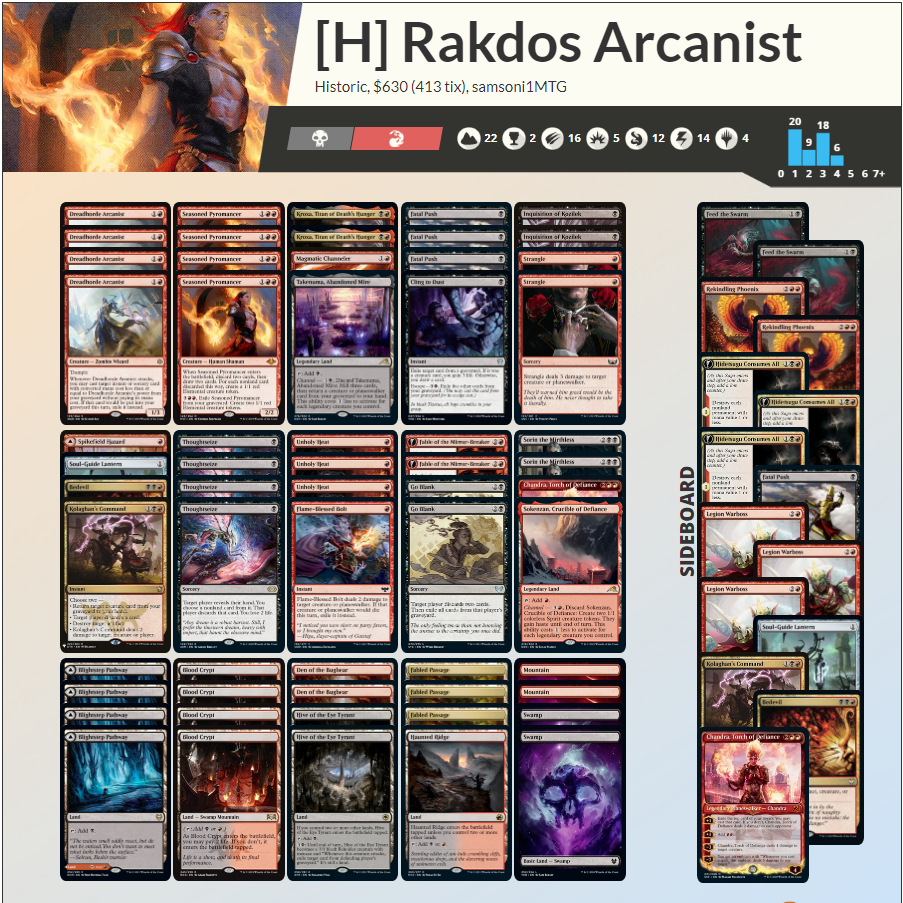 This deck is one that I tested extensively for the championship. Its original idea was from Zach who got second from the last event. I updated the list with strangles to be bolts at home and added Fable to the deck to add extra card advantage. The main reason I did not submit this list is because the best I could get the ctrl matchup is 50/50 and the Food matchup Game 1 is close to unwinnable while games 2 & 3 entirely depend on me drawing the Hidetsugu Consumes All, If I don’t then the game gets infinitely harder. 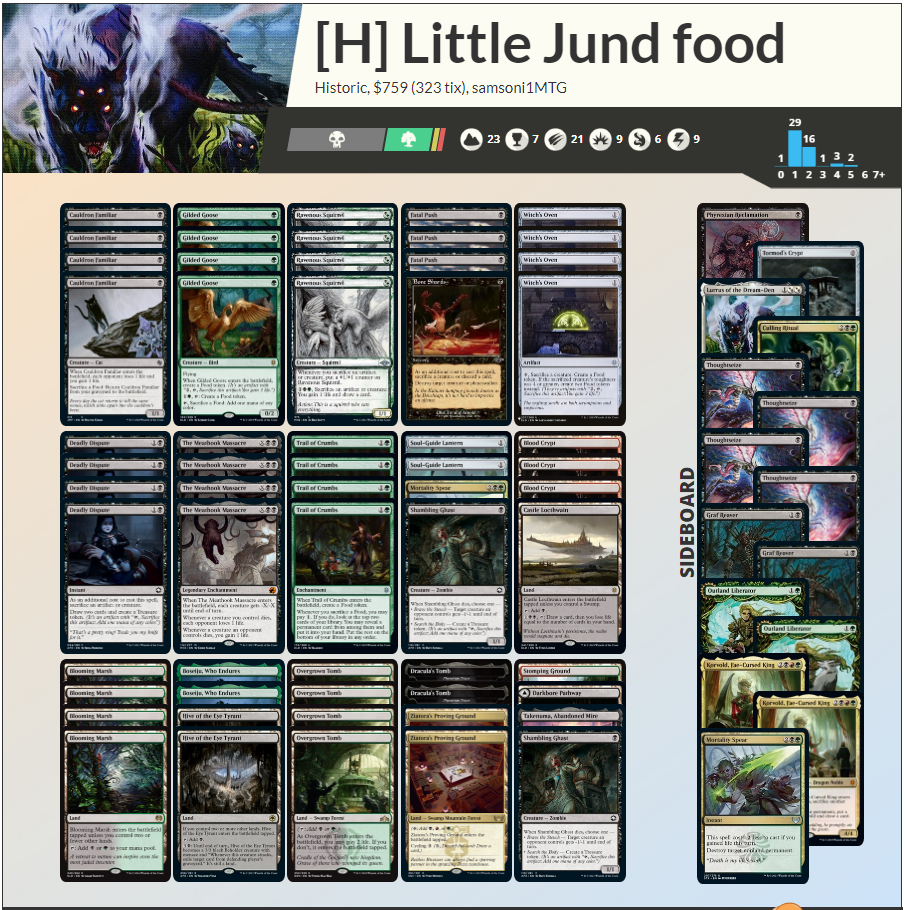 This deck was a take on the already good GB food deck but we decided we wanted to Include Korvold into the SB to make the mirror not complete butts. Unfortunately this did make our Blue white Control match absolutely terrible and our phoenix matchup not that great so we decided against it. However if your looking to just demolish the Food mirror a big stupid fk off dragon does a real good job of doing that 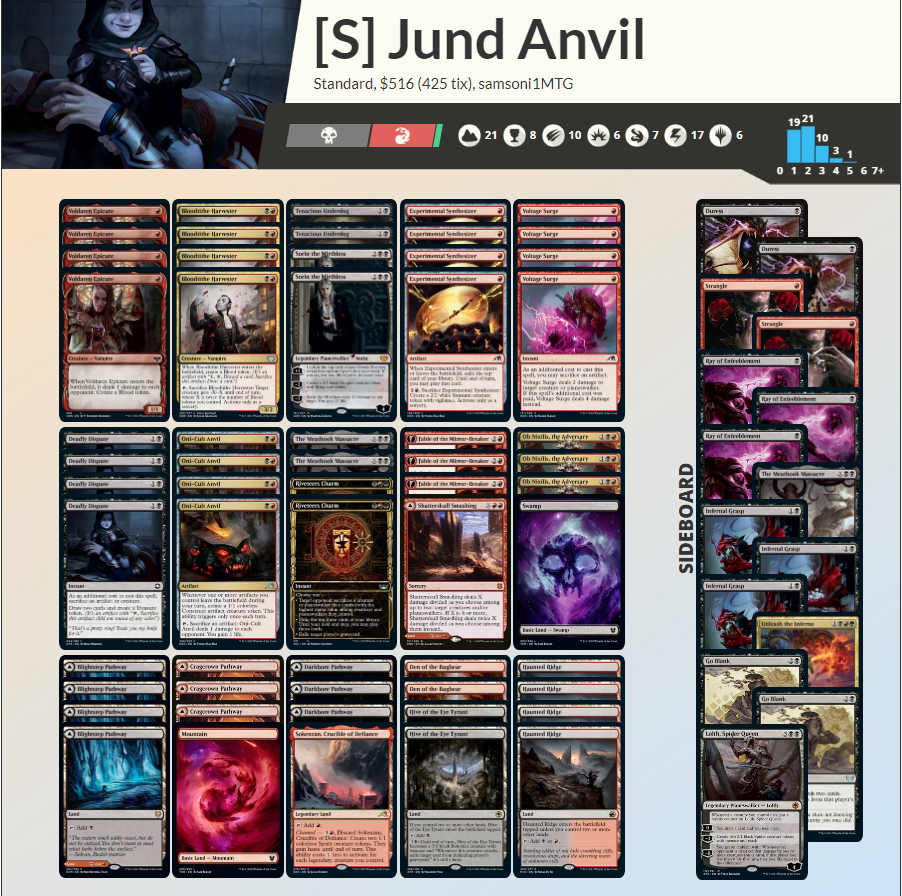 This was originally going to be the deck I submit for standard but I choose against it. Anvil/sacrifice decks have always been my sort of ham and after a good chunk of testing I managed to get a list that had game vs the Esper decks and could do not terrible vs the other jund decks. It felt very strong vs any windfall deck and any mono W deck also. The actual reason I didn’t submit this deck for the Championship is because the team felt it was just not up to the challenge to beat the other decks in the meta but also because we came up with a better idea for the event!

If you’re looking for a very strong standard deck in the meta right now I would highly recommend this deck, it’s also the only deck I think Ob is good in so there is also that. A majority of our testing found that unless you’re in an aggro/anvil list Ob just sucks, luckily this deck is an anvil deck so GO NUTS!. 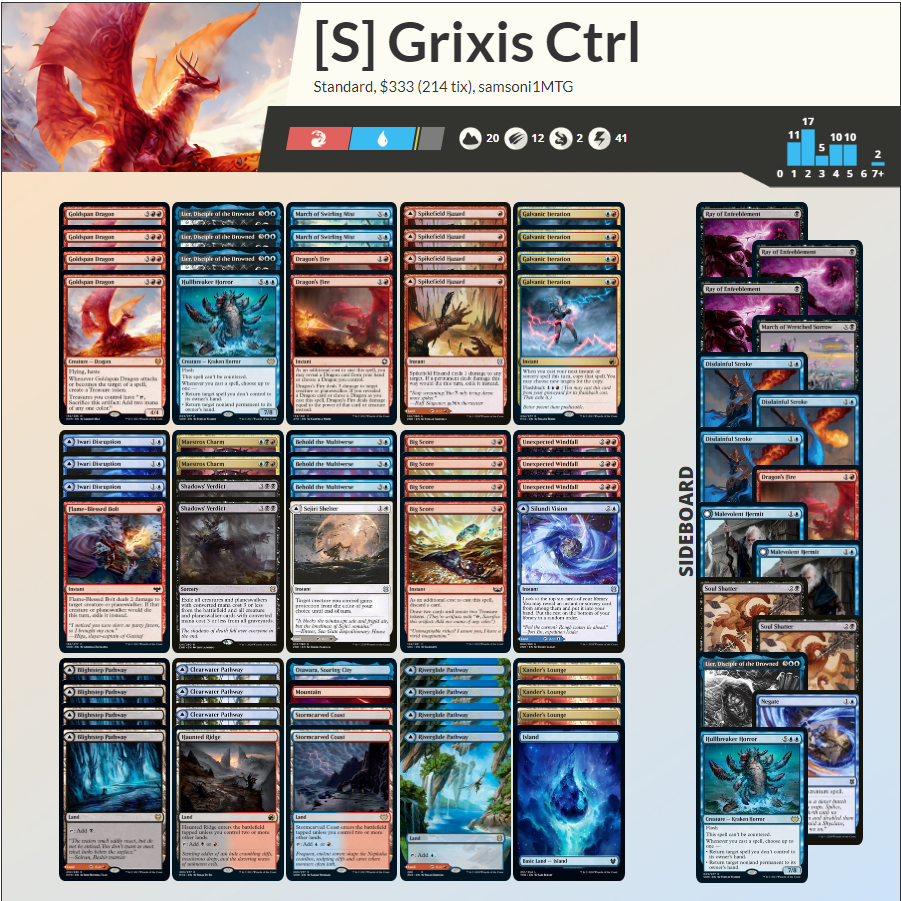 This was a deck that the team put some more effort into, unfortunately with the control decks and midrange decks getting even more early game threats, being able to have a good control deck proved to be too hard / difficult to truly believe that a windfall deck could compete. I think this deck is perfectly fine on the ladder as you’re going to play against a lot more lower caliber players who you can easily out-grind and gain plenty of advantage against. I think I would add a Smoldering Egg in the board over hermits for the ladder and I might add some more early removal to help the ladder match otherwise I think the deck is perfectly fine.

Hope you enjoyed some looks into what the team and I were working on when it comes to the meta. I hope you all cheer me on this Friday along with the rest of the Sanctum of All team
You should 100% follow them all on Twitter and I’ll leave some links so you can stay up to date with the team!

I learned a lot when it comes to testing and preparing for my first ever Pro Tour level event, a lot of things I wish I could have done differently and I think that I could have tested more or even put more effort into all my ideas but I think everyone might feel like at the end of testing. Regardless, I now know what it’s like to be part of a regular testing group and I’m excited for the championship on friday.

As always do follow me on all the social medias along with my team to keep up to date on all our progress into the event!